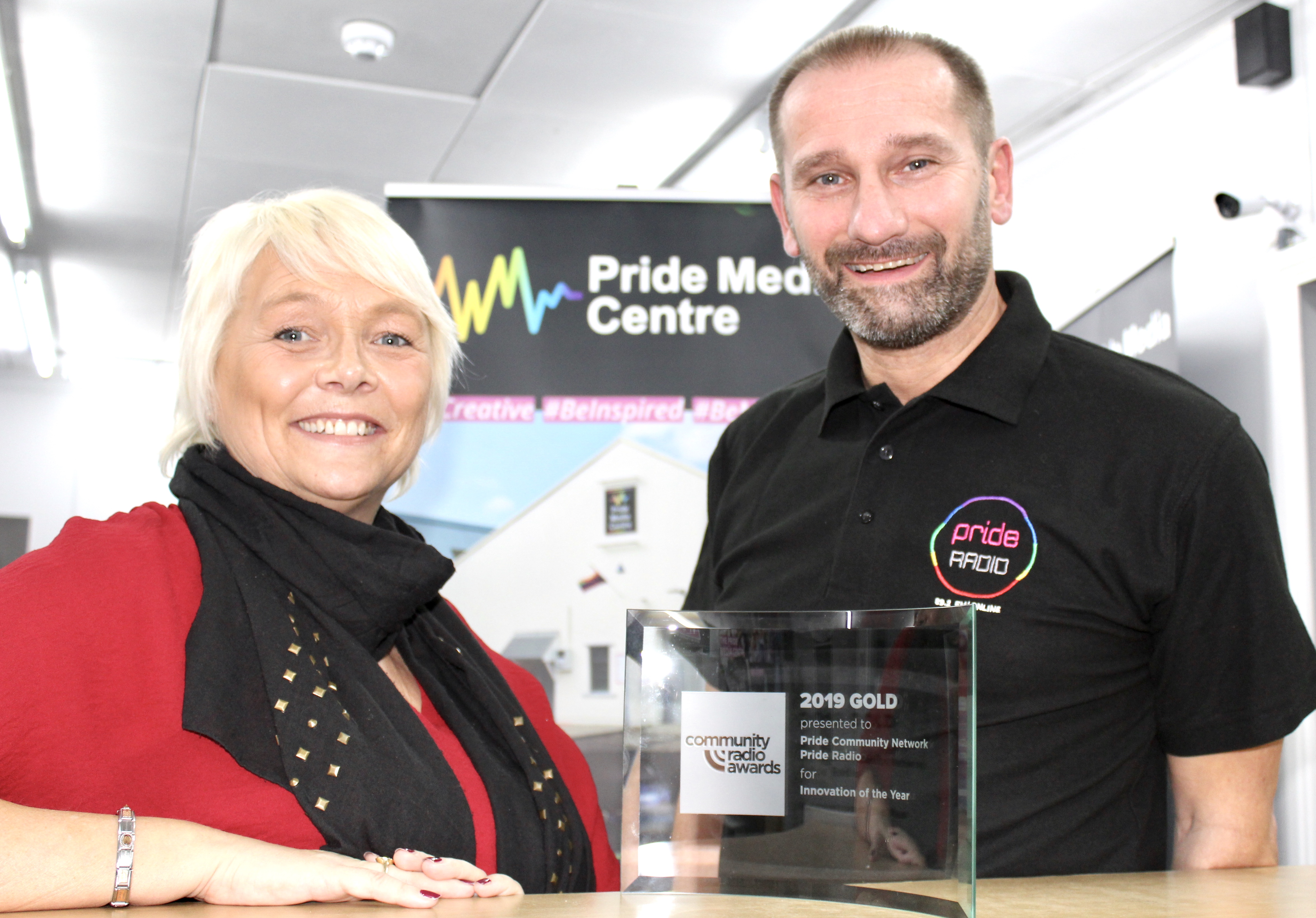 THE UK’s first LGBT+ business and media hub has beaten off competition from across the country to scoop a national award.

Gateshead’s Pride Media Centre was named the winner in the Innovation category in the Community Radio Awards, held in Wales on Saturday (26 October) along with being shortlisted in the Station of the Year category for Pride Radio 89.2FM.

And it is another triumph for the centre which opened just over a year ago and is now home to a whole host of businesses, along with being the base for Pride World Radio, which broadcasts to 127 countries worldwide.

The Community Radio Awards were set up to honour community radio across the UK, with a judging panel made up of broadcasters, academics and the third sector.

Pride Media Centre faced other nominees from across the county to take the prize, recognising the work done to transform the former Stonehills television studio at Pelaw into a vibrant community hub.

Mark Nichols, Chair of Pride Media Centre, attended the ceremony and collected the trophy on behalf of the team.

“It has been an amazing year for us getting the centre off the ground and getting such a positive response,” he said.

“But to have this recognised nationally is confirmation of the hard work everyone has put in at the Pride Media Centre.

“We were up against some other amazing community radio projects, so for the centre to be acknowledged on a countrywide platform is a huge honour.”

The centre, which has been supported by Gateshead Council, was transformed and now has a number of tv and radio studios and recording booths, along with 16 offices which have been rented to fledgling businesses from both the LGBT+ community and their supporters.

Leader of Gateshead Council, Cllr Martin Gannon, said the council was “delighted that Pride Community Network has been recognised in this way and this award is well deserved.

“We’re incredibly proud to have the Pride Media Centre in Gateshead as not only are they ambitious and visionary but they also embrace diversity, something we are very supportive of,” he said.

“The network has only been on air for a short time so this is a fantastic achievement although we know this is only the start of their journey as the team are always looking at ways to expand their service and reach more people. Congratulations to everyone involved.”

Businesses based at the centre are given the chance to develop and be nurtured in the incubator hub, in a safe environment with support given to address any particular issues.

At the same time the centre is planning to run a range of outreach programmes aimed at reaching isolated members of the LGBT+ community and delivering them a range of relevant services.